The term band is thrown around constantly in ham radio discussion and it is included in  many questions in US license exam pools.  So what exactly is a radio band?

Parts of the radio frequency spectrum allocated for a common purpose are called a band.  Besides amateur radio, the reader may be familiar with USA commercial broadcast ranges known as AM band and the FM band, or another personal communication chunk of frequencies called the citizens band (CB).

With amateur radio, bands are generally associated with a number (2m or 40m, for example).  This number is approximately equal to the wavelength of that span of frequencies

We say approximately because a specific wavelength is only valid at one exact frequency and that may be outside the actual range of the band.

Shown below is a chart of the current US amateur bands (dated 2017): 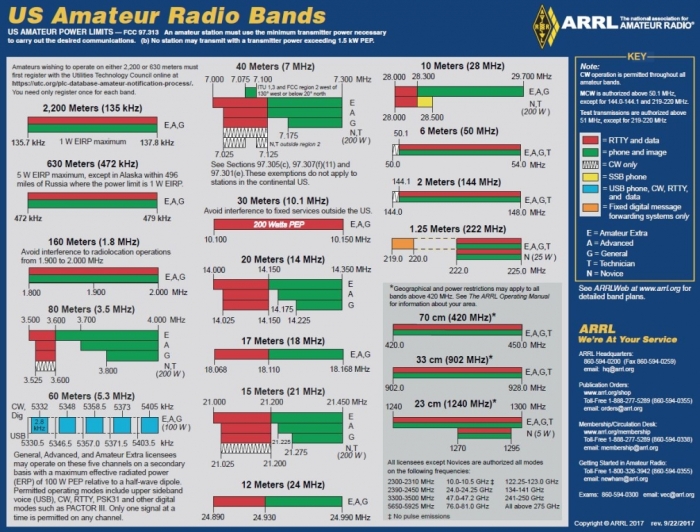 These 18 bands are are named by their approximate wavelength.  For those who care about such details, the named wavelength (λ) may not actually be inside the designated frequency range.  A table of these is given below:

Some do, but why don’t all the meter bands line up with wavelengths inside the band?

Lots of discussion on this issue can be found on the internet and two particularly good links are given in the first two references below.  It’s a real combination of history, simplicity, misuse, and existing broadcast band names.

These meter bands may also have colloquial names.  160m is sometimes called Top Band and 6m is frequently referred to as the Magic Band.  You will also find broad groupings of bands such as HF, VHF, and UHF; each of these will include multiple wavelength-named bands.

Many hams will refer to the voice (phone) portion of 80m as 75m.  However, the 75m phone band is still part of the 80m allocation overall; neither the FCC, Logbook of the World (LoTW), nor QRZ recognize 75m as being a distinct band; it’s still 80m.

60m is an odd duck at the moment.  Instead of a frequency span the FCC allows US amateurs to use 60m at only five discrete frequencies to avoid interference with other services that have primary allocation in the 5MHz range.  This might change in the future as 60m is increasingly opening up to more amateur use world-wide.

Ham radio bands are allocated by geopolitical jurisdiction, so radio amateurs in certain countries can legally operate on frequencies that hams in another nation may not be authorized to use.  The 4m band is used in parts of the British Isles, Europe, and Africa but not available to US hams.  QRZ recognizes it in their logging and awards feature for those who can legally use it.