In an older post we mentioned that hams have no expectation of privacy; assume that anything you say over the air is heard (someone is listening). In another post we discussed what can you say as a ham, focusing on what is illegal. Words are not the only problem; there are a number of activities against regulations.

As licensed radio amateurs we are obliged to abide by our governing authority’s rules for ham radio. In the USA that is found in the Code of Federal Regulations, Title 47, Part 97 (47 CFR 97) , managed by the Federal Communications Commission (FCC).

As with broadcast transmissions (radio, television) the FCC enforces the rules.  Other countries have similar rules and structure so if you are outside of the USA, study up your applicable regulations.

Years ago the US FCC was actively involved in monitoring not only commercial broadcast frequencies, but ham radio bands as well.  There were monitoring stations set up around the country for this purpose.

They also had mobile vans for locating offenders.  Violators might get a very stern letter or possibly a personal visit. 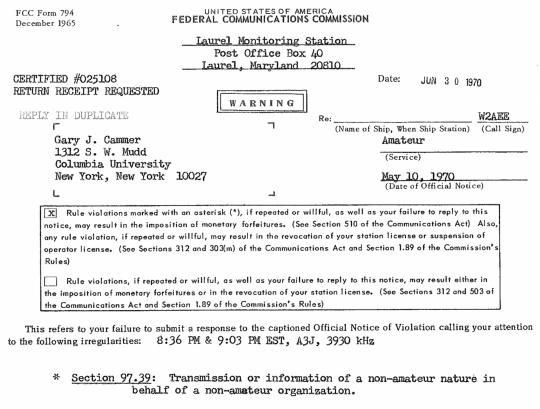 It’s one of the reasons we are supposed to keep a copy of our license posted at our station.  A FCC Inspection Fact Sheet gives good information related to home inspection.

Those days are long gone.  The FCC has closed many regional offices and pared back their enforcement staff to a minimum.  However, they are still the ultimate authority for radio in the US and still have teeth.

When the FCC reduced their enforcement resources they partnered with the ARRL to have hams help do much of the monitoring and reporting.  Originally called Official Observers (OOs), they were hams who were qualified and trained by the ARRL as part of the Amateur Auxiliary program.  While there are fewer FCC agents, we are still being monitored for Part 97 violations, primarily by fellow hams.

The OO scheme was replaced by the Volunteer Monitor (VM) program in January 2020 with a new agreement between the FCC and the ARRL.

The intent of the VM program is to re-energize enforcement efforts in the Amateur Radio bands.  Its role is to monitor the airwaves and collect evidence that can be used both to correct misconduct or recognize exemplary on-air operation. Cases of flagrant violations will be referred to the FCC by the ARRL for action in accordance with FCC guidelines. 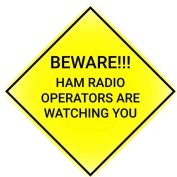 Note that good behavior is also recognized. Be the ham that gets a favorable postcard from a VM, not for an infraction. 🙂

Bad behavior is what monitors are really trying to weed out.  A cautionary notice may be sent to hams who violate rules.  If the violation continues, the VM system has a streamlined enforcement process with the FCC who can take legal action.

So what are some of the bad practices and violations that VMs are looking for?

While not exhaustive, violations include:

Finally, the stereotypical monitoring van may still be used.  VMs and federal agents may occasionally have to track down an offending signal using direction finding techniques.