Capacitors are a fundamental electronic component and their property of capacitance in Farads (F) are a core part of radio circuitry.

The basic capacitor is a pair of metal plates separated by some form of dielectric insulation.

Electrolytic capacitors are special because they have a lot of capacitance—hundreds or thousands of microfarads (µF)—in a relatively small package.

Most big electrolytic caps are in the radial package where both leads are on one side. The axial package with one lead on each end of the cylinder are sometimes used.  See axial vs radial.

Aluminum electrolytic capacitors provide the highest values while remaining relatively inexpensive so are commonly encountered in radio and electronics.   This is possible because of wet chemistry; specifically, an electrolyte solution as part of the dielectric layer between metal plates.  Aluminum foil is the primary conductive surface and the electrolyte is part of the separating insulator. 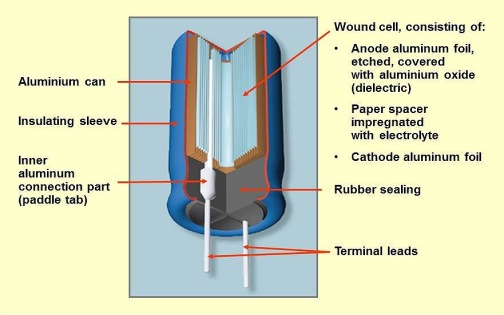 Aluminum electrolytic capacitors are frequently used in power supply circuits such as shown below, and are found in most every type of electronics:

OK, so this is wet chemistry but a dry topic. Why are we boring you with all this?

There is a practical point here for those of you who are handy or brave enough to tackle your own electronics repair; hams tend to be a DIY group.  Be advised that many functional problems in all sorts of electronics—not just radios—can be attributed to failed aluminum electrolytic capacitors.  We hope to encourage you to fix an expensive piece of equipment, not just toss it or pay someone to repair it for you.

Usually an easy fix with just two component leads to un-solder and then re-soldering the replacement. Diagnosis END_OF_DOCUMENT_TOKEN_TO_BE_REPLACED