“Lid” is ham-speak to denote a poor operator; one who is inept at the practice of the radio amateur art.  It is someone with very poor operating technique, a newbie or an experienced ham that acts like a neophyte. This old term likely originated from the days of wired telegraphy.

A previous post entitled, What Can I Say?,  presented more don’ts than dos, which was appropriate considering the topic.  This is a good time to review it.

In addition to those prohibitions, we’ll expand on the topic and add a few more things a good ham doesn’t do, assuming you don’t want to be known as a lid.  Most are things a good ham should avoid saying.  In fact, this article was originally entitled, What Should I Not Say?

There are some bad habits certain hams need to break, mainly because it demonstrates ignorance and carelessness.  Other amateurs may not take you seriously if you practice these things.  Numerous ham websites list pet peeves containing these bad practices (a few are linked below).

Some liddish behavior is understandable or excusable in a brand new ham but habits form quickly.  These are generally frowned upon and the perpetrator may find themselves publicly shamed (in a hammy context).  Don’t let it happen to you!

Here is a short list of things a ham should not do:

This is a handheld transceiver ⇒

This is a Handie-Talkie ⇒ 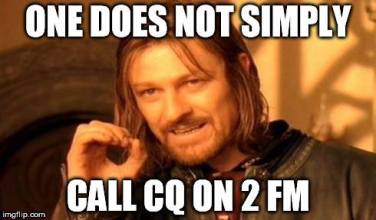 If you want to talk to somebody/anybody, simply ID and ask for a QSO.

All of these are bad practice; lid-like behavior, although only a few are likely to earn END_OF_DOCUMENT_TOKEN_TO_BE_REPLACED