As we learned in an earlier post on the ionosphere, the real magic in ham radio is skywave propagation where HF  band (and sometimes VHF) signals can travel well beyond line of sight (over the horizon), even to the other side of the planet if conditions are right and radio waves may bend back to earth in the ionosphere.

This topic is very complex and not completely understood.  Study is ongoing and radio amateurs have contributed greatly to the science; much has been learned in the last 100 years or so since radio became a real thing.   Great detail is found below in some excellent web links.  A brief summary of how solar activity influences the ionosphere is presented here:

Solar/Space weather is a study of how solar events affect the earth’s magnetosphere.  A/K (long/short-term) indexes measure the stability of Earth’s magnetic field.

Hams worldwide who are active on HF and VHF bands pay a lot of attention to solar activity because of how it affects propagation and noise levels.  QRZ features N0NBH’s graphic summary of important solar and geomagnetic conditions on their main page as shown below.  Some hams and ham websites include this data on their own pages as well, so you may see this sort of info a lot.

Presently (2018-2019) we have days on end with no sunspot numbers, resulting in awful HF propagation (note sunspot number SN=0 above).

Despite these poor conditions that limit decent phone (voice) and even CW (Morse) QSOs, hams can still make contact with domestic and international stations using some of the newer digital modes which can decode extremely weak (inaudible) signals.

We are hopefully approaching the end of the current solar minimum with dreams of increasing solar activity in the coming several years.

Solar activity is so important to hams that there are 16 related questions in the General class license exam question pool (only two with the limited privilege Tech pool).  Some END_OF_DOCUMENT_TOKEN_TO_BE_REPLACED

There are many questions concerning the ionosphere and its layers in US license exams.

Experienced hams talk about the ionosphere a lot these days and we see plenty written on the topic in amateur radio websites and magazines.  So what’s the importance of the ionosphere?

The real magic in ham radio is skywave propagation where signals can travel well beyond line of sight, even to the other side of the planet if conditions are right.  We can have two-way radio communication between Iceland and Australia and places in between because voice, video and data signals may be bent back to earth by the ionosphere.

The ionosphere is shell of electrons and electrically charged atoms and molecules (ions) that surrounds the Earth, stretching from a height of about 50 km (31 mi) to more than 1,000 km (620 mi).  Because this band is electrically active the ionosphere is able to reflect or refract electromagnetic radiation at certain frequencies, the HF bands in particular.  For most hams communicating beyond line of sight is a big deal and the ionosphere is what makes long distance (DX) contacts commonplace.

There are two defined ionospheric layers at night and four in daytime, the difference being exposure to the sun which provides most of the energy to the ionosphere. 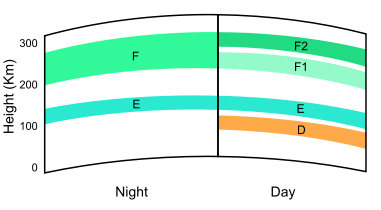 In daylight the F layer separates into F1 and F2 regions.  Because F2 is farthest from the earth’s surface it can bend radio waves the greatest distance.

Long-distance propagation changes with day/night cycles and seasonal variance away from the equator.  There are numerous anomalies and disturbances that can affect the ionosphere.  Between all these factors the ionosphere is not a uniform shell; it has varying height, thickness, and density.  This continually changing area makes HF propagation highly variable.

In addition to single skip distance, the earth itself can reflect/refract signals from the ionosphere back up, resulting in a secondary skip or hop and perhaps END_OF_DOCUMENT_TOKEN_TO_BE_REPLACED